What are the global trends shaping your company’s reputation?

RepTrak Company’s reputation analysts recently published their 2022 RepTrak Global 100, an annual report that collects their key findings in corporate reputation. The analysts provide a helicopter view of reputation gains and losses among companies worldwide, and identify the societal factors that most influence corporate reputation today.

We ploughed through the report and earmarked the essential drivers that determine how the general public perceives companies and sectors in 2022. In a nutshell: Environmental Social Governance (ESG) has never been such a decisive factor in how we judge brands and companies; the famously demanding Generation Z is gaining purchasing power and consequently becomes a target group to reckon with; and the way the reputational impact of corona-induced lockdowns differs from country to country highlights the importance of local circumstances in understanding corporate reputation.

The state of affairs

Let’s set the scene with the global picture. According to RepTrak Company, 2022 is marked by a bit of a reputational slump: the average global reputation score for companies and sectors dropped from 74.9 to 74.2. According to RepTrak Company, this is due to a general sense of ennui among people. In response to the pandemic and the many political, social and economic tensions since 2020, many companies engaged in highly-charged, socially committed rhetoric – today, it seems, the effect of this rhetoric has worn out and many people are left feeling disappointed. The general public finds that companies ultimately failed to manifest themselves as relevant social actors.

By now, the reader is probably thinking: it’s only a 0.7 point drop, that couldn’t really lead to any serious consequences. Not so fast: based on historical research data, RepTrak Company found that a 1% drop in reputation score translates into a 4% to 5% drop in supportive behavior from consumers. This includes, for example, consumers’ willingness to buy or recommend a company’s products or services, willingness to work there, and willingness to invest.

Above all, this global picture demonstrates that corporate reputation is never set in stone and remains subject to ever-changing societal expectations. In this regard, RepTrak Company also identified some notable “winners”: Xerox, Burberry, MSD and Paypal made double-digit jumps to the top of the annual ranking of most reputable companies. Volkswagen Group, the biggest climber of the year, even jumped up 53 places. Clearly, the turbulence of recent years has faded the memory of the company’s filter scandal. 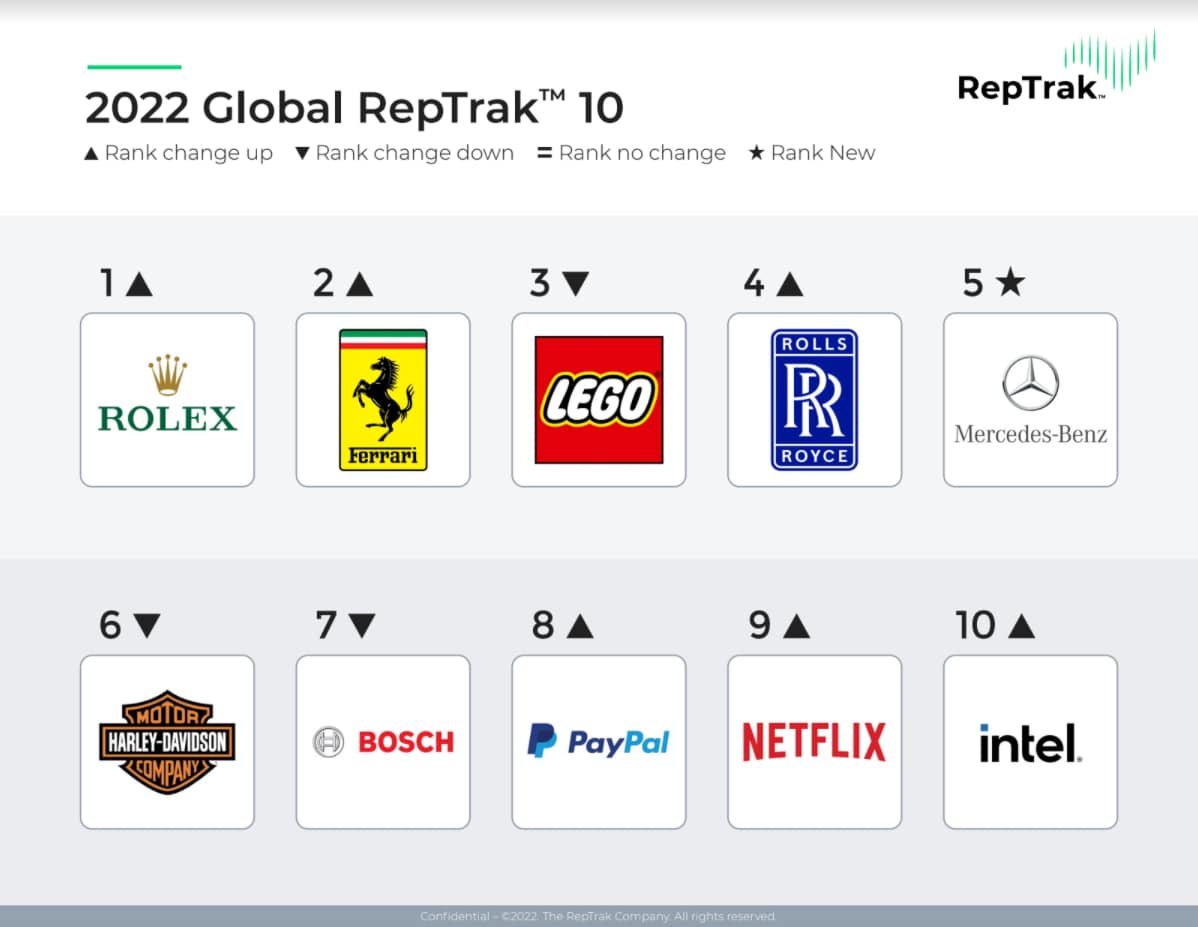 The public is closely eyeing your ESG promises

The analysts note that a company’s sense of conduct and citizenship have become the second and third most decisive factors that determine corporate reputation.

And if we zoom in deeper, it becomes clear that the importance of ESG as a defining factor of corporate reputation has never been greater than in 2022. According to RepTrak Company, a low ESG score is associated with a “Willingness to Buy” score of only 20%, whereas a high ESG score translates into a willingness to buy of up to 60%.

The next generation issues its demands

The demographic group that notoriously harbors the highest expectations from companies are the youngsters of Generation Z. This generation – roughly speaking, those born after 1997 – is often characterized as more demanding, critical and values-oriented than older generations.

According to RepTrak Company, their influence has reached a new stage: Gen Z is getting older and entering the job market, where they’ve become the elusive target of the War on Talent. When it comes to consumption choices, they are markedly more guided by their own values than older generations.

As a result, RepTrak Company finds that, in all categories, Gen Z respondents assign a lower average reputation score to companies than Millennials, Generation X, boomers or those over 65. Meanwhile, Millennials are approaching their 40s, and RepTrak Company notes that their perceptions of companies are increasingly more in tune with those of older generations.

A final key finding from RepTrak Company is that the pandemic had highly differing impacts on corporate reputation, with pronounced differences from country to country. In countries where people perceived covid measures to be severe – such as Australia, the US or the UK – we noticed a marked decline in the average reputation of companies in 2022. RepTrak Company suspects that the mental malaise of strict lockdowns trickled down to consumers’ personal experience with everyday brands and companies.

The fact that reputation is heavily influenced by specific regional circumstances should not be overlooked. Take, for instance, the floods that hit Wallonia last summer: this natural disaster affected only the south of the country, and resulted in a collective experience for Walloons that differs greatly from that of their compatriots in Flanders or Brussels. Consequently, in the aftermath of the floods we noticed that Walloon respondents had a significantly different perception of companies than respondents in the rest of Belgium.

Let this be a reminder that knowledge and affinity with specific regional contexts are essential when building a strategy to safeguard your corporate reputation. As RepTrak Company’s exclusive partner in Belgium, akkanto translates their quantitative research into tailored advice for companies, taking into account local sensitivities and context-specific factors.